The final stage of Tour-de-sock features a very unusual sock pattern by Kirsten Hall called Sidetracked. I am determined to complete this round, despite my flagging motivation. I have tried a number of different needle combinations hoping to stumble on the ideal combination. I’ve tried some old, some new and some very different.

To put it into perspective, here’s a picture of this round’s socks. 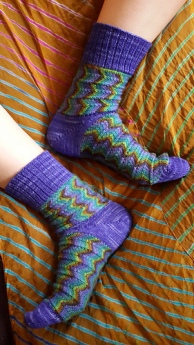 The pattern dropped last Saturday at 4:00 am, my local time. I was printing off the pattern and had my first sock underway by 4:20. We planned a trip to visit grandchildren for the long weekend. I was determined to get as much done as possible before we hit the road around 11:00 am. I was grateful that the construction, although strange, was actually pretty fun.

I had the sock on a 60cm circular needle to start and worked the 12 active stitches with a DPN. It was awkward. I ended up with one circular and 4 DPN’s at one point. It was a very strong reminder of why I really prefer not to knit with DPN’s. It’s so easy to drop stitches off them. You don’t want to drop stitches on this pattern! By 4pm, I was feeling pretty done. With one sock barely half way done, I set the project aside and watched the scenery go by until we arrived.

I really struggled to determine how far to knit before beginning the heel and I have to say that I should have stopped a full wrap earlier than I did… which I couldn’t have known until after the heel was complete. By then, there was absolutely no way I was frogging anything. I’d be lying if I said it didn’t take the wind out of my sails. They’ll take longer to finish but they’ll fit my very tall son when they are done. 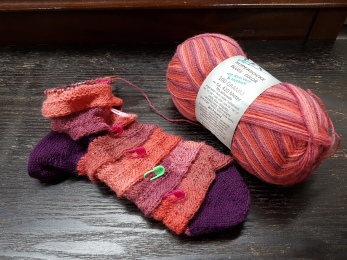 I came home to a big pile of work. I’ve been plugging away in the evenings. I still haven’t finished the first one. I’m ready to begin the cuff, so I’m on the home stretch and the second sock will go easier since I’ll know what to expect. I have until Thursday at 10:00 am to finish.

So yesterday, I was feeling pretty desperate to come up with some way to infuse some fun back into this project. I had a shipment of needles come in and in that order were 25cm circular needles. My supplier was a bit short on numbers and there was one lonely 2.25mm needle among them. That’s the size I’m using for these socks. I’ve had customers tell me that these teenie tiny circulars are God’s gift to sock knitters. (I wasn’t convinced.) What with all the new stock, I had to rearrange the wall in the store to accommodate all the new stuff. In the process I stumbled on the sets of curved DPN’s I had all but forgot I brought in. I figured I’d try these out too.

I pulled out the Neko curved DPN’s. I was immediately disappointed. They are plastic. Sigh. So bendy! I am not crazy about bendy needles. I took a deep breath. I was determined to give them a fair shake despite my initial feeling. I looked at my Sidetracked sock-to-be: didn’t even pick it up. My daughter had requested a pair of socks out of some Lana Grossa Scandic yarn and I had that ball handy. I figured I’d cast one on to try the bendy needles out. These needles look like someone took their DPN’s and tried to bend them to 90 degrees. They are definitely different. 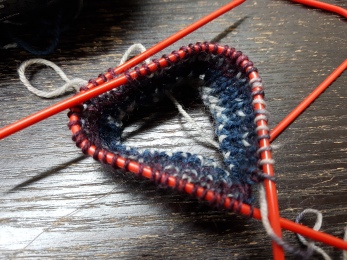 I began my Twisted German cast on, over two of the three needles; I usually cast on over two needles. It was awkward, although in all fairness, it takes getting used to something that is this unusual. By the time I had 15 or 20 stitches cast on, it got easier. It was challenging to get started on these. I found that no matter what I did I kept jabbing myself in the palms of my hands with one end or another. I’ve been knitting long enough to know that the first few rounds are always a bit of a pain and then it’s fine after that. So I continued. My yarn kept getting caught on one of the ends. I really don’t like bendy needles and found that the flexibility of these really irritated me. I assume that the point of these needles is to be an improvement on DPN’s. I’m not convinced. But bear in mind that I abandoned DPN’s for sock knitting a long time ago in favour of circulars. I got about 4 rounds of twisted rib knitted and I had to set it aside. I tried having the tips of the passive needle above the active needle, then below; I tried flipping it toward the back. I don’t know. I didn’t see any videos with continental knitting on curved DPN’s. Perhaps that’s the issue. I will pick it up again after the Tour is finished and see if they’ll grow on me. For now, the jury is out on these. 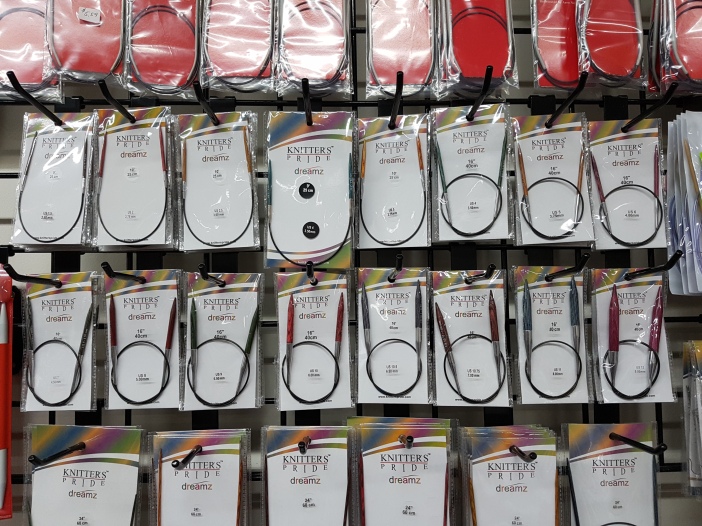 I then picked up the Knitter’s Pride Dreamz 25cm circular and transfered my Sidetracked sock onto it. The sock fits nicely. The needle tips are short. I thought they’d put up resistance as I’d knit with them because the cord is so short, but honestly I didn’t notice once I started to knit. This needle is a huge improvement over what I was doing. Heavens! What a relief. I like a longer needle tip so I can use my pinkies to anchor my movements against the needles. These tips are too small to do that without scootching my fingers close together. That will take a bit of getting used to. But you know,  I was quite surprised, but I really do like these… a lot. The only downside is that they’re too small to try the sock on, unless you were to use two of them.

We are Judy's Designs, a yarn shop, also offering sewing alterations and repairs, and custom sewing services in Revelstoke, BC just off of Victoria Rd. See our products at JudysDesigns.ca